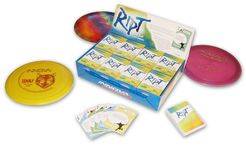 A deck of cards marked with special functions as well as standard card values. The game is played during a round of disc golf. Each player receives three cards at the beginning of the game and one for winning a hole. They may play their card to perform the action stated on it, such as taking a mulligan, subtracting one stroke from their score, trading a disc with another player, swapping 'lies' with another player, or forcing another play to throw with their off hand. An official variant involves collecting the best poker hand by the end of the game. Home Page: http://www.knagames.com/Ript%20Community/Community.htm