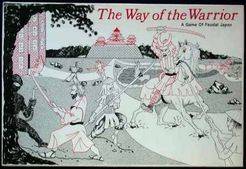 The Way of the Warrior is a highly abstract game of conflict in medieval Japan. Players take the part of opposing daimyos and attempt to either capture the other player's daimyo or assault the other player's stronghold and rescue the hostage they are holding. Each player has an identical set of 16 cardboard pieces representing his daimyo, a ronin, a ninja, archers, etc. Each type of piece has different abilities - they have different ranges, some can attack more than once on a turn, some can jump other pieces, etc. On each turn a player draws a card and then rolls either one die (if a Karma, or event card was drawn) or two dice (otherwise) and can that many spaces in total, using any number of pieces. In addition to the Karma cards there are Warrior cards. Some of these can be used for special effects and others can be collected in sets to deploy the more powerful units on board, among other uses.