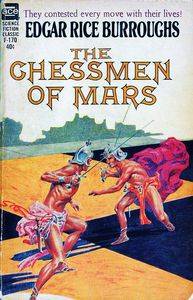 Jetan, or Martian Chess, is a two-player abstract game played on a 10-by-10 board. Each side has a set of twenty pieces of varying types, with each type having its own set of movement options. The game is unlike traditional Chess in a few important respects: All pieces in Jetan have limited movement (i.e. the Chief moves three spaces in any direction or combination of directions). One piece on each side (the Princess) cannot capture other pieces. The conditions for a win or a draw (described below) are unusual. "The game is won when a player places any of his pieces on the same square with his opponent's Princess, or when a Chief takes a Chief. It is drawn when a Chief is taken by any opposing piece other than the opposing Chief; or when both sides have been reduced to three pieces, or less, of equal value, and the game is not terminated in the following ten moves..." -- from Edgar Rice Burroughs' novel "The Chessmen of Mars".