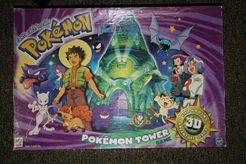 This game is part of the 3-D Expanding Adventure Series of Pokemon games that can be played by themselves or combined with other games in the series. From the rulebook: Fuji has the Poke Flute you need, but you have to battle your way to the top of the Pokemon Tower to get it! Roll the dice and move through the rooms. Collect cards, battle other players, and catch Pokemon along the way. But beware! Ghost Pokemon may attack you. When you get to the top, you have one last challenge ... be the first player to defeat Team Rocket! If you do--you win!