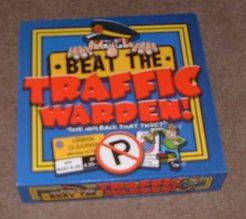 (from the back of the box) "Give him back that ticket! Ever since September 1960, when the very first parking ticket was given to an unsuspecting Doctor on call. It has been a global game not to get a ticket. Now the game has come to life and you can "Give him back that ticket!" Over thirty years later and the game is still being played on the streets. Even if you have never had a parking ticket, Beat the Traffic Warden will appeal to all as a fun, spirited and enjoyable board game. It is not a game of pure chance, you need skill, tactical risk taking and determination to beat the Traffic Warden. A game that generates great excitement and may bring out the rebel in you! It's a game we can all relate to. Feel really good handing the tickets back to the Traffic Warden, or get a great buzz from playing the Warden and handing out tickets yourself. Whatever side suits your personality. Beat the Traffic Warden makes the impossible possible." Functionally, this is a straight-forward roll-and-move Monopoly game, but with a player-controlled adversary to add extra interaction to the game. The plastic bits are very nice.