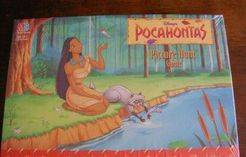 This is a simple children's memory game using characters from the Disney film. Thirty character picture tokens are inserted into into leaf tiles that are then placed face down in a 5x6 grid. On your turn you turn over a tile so that all players may see it. If the token revealed is Pocahontas, John Smith or Meeko, you remove and keep the token then replace the tile face down. If the tile reveals a token of any other character, a character you've already collected or is empty, you replace the tile and do nothing. The first player to collect 1 Pocahontas token, 1 John Smith Token and 1 Meeko token wins the game.