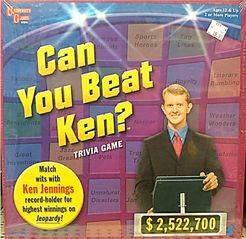 From an article on CNN.com: The idea behind "Can You Beat Ken?" is a match up between Ken [Jennings, Jeopardy! champion] and the players as they try to answer some 1,200 trivia questions broken up into several different categories such as sports, science, contemporary music and history. The challenge is to see which player, including Ken, is able to reach $2.6 million (the amount Jennings actually won on Jeopardy!) in prize money first. "The game is unique in that we actually tested Ken with all 1,200 questions," [University Games spokesman Alex] Plant said, although neither he nor Jennings could recall how many of the game's questions Jennings actually answered correctly. "Ken may have gotten some right and some wrong and we recorded how he answered each question on the card itself," Plant said. That allows players to see how they held up against the Jeopardy! whiz.