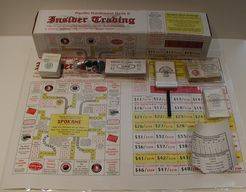 Insider Trading, which has been dubbed Pacific Northwest Rails II, focuses on the five major lines that served Spokane and surrounding vicinity. It is the first Gandy Dancer game featuring the hauling of commodities. As in the prior two Gandy Dancer releases, players earn money by making runs with their railroads and by buying and selling shares on the stock market. Players take turns investing in railroads and using those railroads to ship goods in this acquisition race. Insider Trading has the added features of hauling commodities for additional profits, and as its name indicates, manipulating the stock market by using insider knowledge. But don't get caught up in a scandal or it will cost you dearly. Players start with a stock portfolio of $100 and some cash (the amount varies depending upon the number of players). In turn, a player may play a movement card, roll a die or pay to move around the gameboard. The space on which a player lands may allow that player to buy and stock in a railroad, use that railroad for shipping, draw and trade commodity cards (sets of which can result in big rewards) and draw insider trading cards (these allow stock manipulation). There are penalty spaces but these can only be landed on because of a die roll. The game ends when one railroad has hauled one load of each of six commodity groups or when one player goes bankrupt. The player with the most money is the winner.