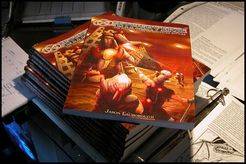 From the publisher - ÆTHERVERSE: The Infinite Game of Miniature Battles Now available from Triskele Game Design Studios, Ætherverse is a science-fantasy miniature wargame with infinite possibilities. It's set in a sci-fi universe where the theory of multiple universes was proven to be true... and proving it set off wars across the Ætherverse by opening up new avenues of conquest. This backdrop provides limitless freedom to create worlds and armies, and to fight out wars between universes on your tabletop. Ætherverse includes background material on over a dozen of these universes and the dominant empires on the Earth in each. The core rulebook includes 17 army lists, featuring the armies of these nations and races. Fifteen battle scenarios are also included to give you reasons to fight. One of the key features of Ætherverse is the Army Creation System. Designed to allow the player to field any army they can possibly imagine, the Army Creation System presents a set of rules for creating an army from complete scratch. Design an army list to feature any miniatures in your collection and to play battles from anywhere within your imagination. Ætherverse gives you this freedom. There is no limit on what you can create