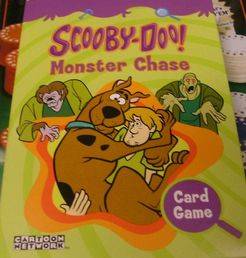 This card game combines a Scooby-Doo theme with Blackjack-like mechanics. Players are trying to capture monsters. There are 12 Monster Cards (with high numbers) depicting various creatures from the TV show, and 40 Number Cards (with low numbers) depicting Fred, Daphne, Velma, Shaggy and Scooby. To start, a Monster Card is drawn and placed in the center of the table. On your turn you may either draw 1 Number Card from the pile or pass. You are trying to draw cards whose total is closest to the number on the Monster Card without going over. When all players have passed, the cards are revealed. The player who is closest collects the monster and draws first in the next round. The player who captures the most monsters wins.