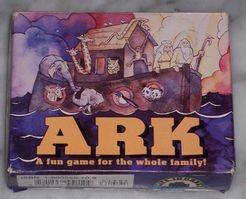 The object of the game is to earn more points than any other players by building an ark, loading the ark with 8 pairs of animals, plus Noah and Mrs. Noah and by doing good deeds. Players start each turn with six cards and must play as many cards as possible. The player has a "corral" where he can hold up to four singles or pairs (including Mr. and Mrs. Noah). When all three parts of the ark are complete, up to eight pairs may be moved on the ark, plus Mr. and Mrs. Noah. When one player has a full ark, the game ends. Players can play not only to their own ark or corral, but also to other players' arks and corrals. Completing a part of another player's ark, giving another player a pair for his corral or ark, or completing a pair in a player's corral is considered a "good deed". For each one the player collects a "good deed" card good for points at the end of the game. Good deed cards can also be used to cancel "misfortune" cards drawn from the deck.