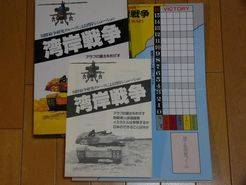 This is a Japanese game. However the name is "Gulf Wars", this game actually simulates political conflict in the Middle East. Up to five persons can play at the same time. Each player commands Iran, Iraq, Egypt, Syria or Saudi Arabia and compete against each other for the position of "leader of the Arabs". Published by Sho Kikaku(STR Games line) in 1991.