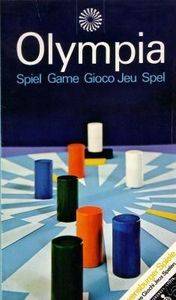 Olympia, the official game of the 1972 Olympics in München, Germany, is a dice rolling racing game. The board depicts the emblem of the München Olympic Games. First person to move two tokens from the periphery to the middle of the board is the winner. Olympia is part of the Ravensburger Casino Series, a ‘bookshelf’ line of games published in the Seventies.