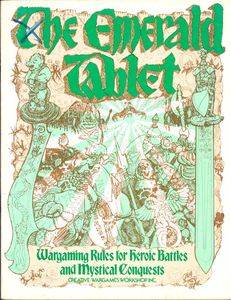 "Wargaming Rules for Heroic Battles and Mystical Conquests." A comprehensive (56 pages) set of miniatures rules for conducting warfare in a fantasy setting. Both combat and magic are used to resolve battles. The rules are designed for standard 25mm miniatures, but guidance is also given for playing with 15mm miniatures. The rules "comprehensiveness" is readily apparent: almost every aspect of any epic fantasy battle in any story ever published in any century is covered. Really. Behold a random sampling from the rules' index: Ceremonial Magic Bombards Metamorphoids Sacrificial Victims Chariots Oblique movement of self-disciplined units Rules for innate chi projection Killing rampaging large mounts Infernal Engine Disadvantages Unconscious and mad magic users Aerial unit fatigue "Goetic Magic Hour Correspondence Charts" Effects of routing units on dray animals Klipothic and Beneficient Magic The rules' color text claims that the magic system "is based on the actual grimoires (magical texts) that guided medieval European thaumaturges (workers of miracles)." Cardstock sheets are designed to be cut into individual spell cards marked with "evocation circles, mystical symbols, demons and angels that have been familiar to magic users for centuries." It is hard to judge the historical accuracy of such statements, but the book is packed with so many spell charts, Astral Force cards, magic critical fail results, and the affects of "High Magic Color" rules that Merlin would probably sell his left one for just one peek at the last 30 pages of the book.