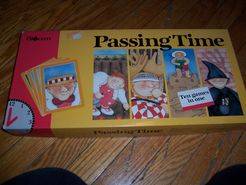 This is an educational item, with ten different games included: 1. The Lotto Game 2. The Chronology Game 3. Self-Correction Game 4. A Game of Association 5. A Game of Patience 6. The Memory Game 7. the Series Game 8. Invention Game 9. The Clock Game 10. The Dominoes Time Game In addition to the rules, it includes a book, 24 cards, and a cardboard clock which are used in the various games. The cards are half black, half white and have a picture of a clock in one half and a different time written in numerals on the other half. Haven't tried the games with my little one, but the components are quite nice.