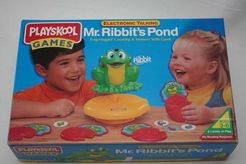 This game features Mr. Ribbit, an electronic plastic frog who sits on a large central lily pad. Nine smaller lily pads are placed in a circle around it. The small pads have a picture of either a bug or a gator on their bottoms. On your turn, you pick up Mr. Ribbit and place him on any small lily pad. If he says "Sproing!", hop him to the next lily pad and so on around the circle. When he's through "sproinging", he will say "Rrribbit! Who's there?" You must then guess if the lily pad he's on has a bug or a gator underneath. If you guess correctly, you keep the lily pad. If Mr, Ribbit says "Splash!", move him to any lily pad of your choice. The first player to collect 3 lily pads is the winner. A second game may be played where players collect bug tokens instead of lily pads.