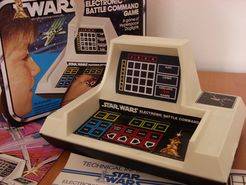 Star Wars Electronic Battle Command Game was a space exploration game that you could play by yourself or against 3 other players. The screen was an LED grid which showed coordinates. You could 'zoom' in on a coordinate to get a closer look at a star system, or come across other player's ships. Quotes from the box: "A game that brings you the space battles of Star Wars with three levels of play..." "A self-contained Micro Computer Game which allows you to simulate all the exciting action and strategy of Hyperspace combat." "Display panel which shows you your location in Hyperspace along with planets and enemies." "You can choose to take evasive maneuvers from your enemy, go to battle stations or screen up for invisibility." From the rulebook: "Star Wars Electronic Battle Command Game is probably the most exciting computer game you will ever play!"