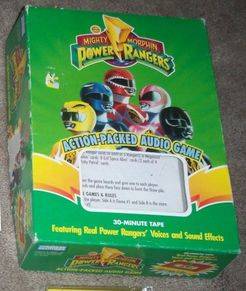 This is actually 2 games that use an audio cassette to direct the game play. Game #2 (Side B on the tape) is a more complex version of Game #1 (Side A on the tape). To start each player takes a board that depicts all 5 Teen Heroes. The tape will tell you when to draw cards and when to battle. The object is to cover your Heroes with their Power Ranger counterpart cards. A Rita Repulsa card may be played on an opponent to make him or her lose a turn. A Putty card is immediately discarded (thus wasting a draw). A Space Alien card may be placed on an opponents Power Ranger card forcing that player to play another Ranger card on that space. A Megazord card defeats a Space Alien and/or prevents further attacks on that space. The first player to morph all the Teen Heroes on his or her game board into the corresponding Power Rangers wins.