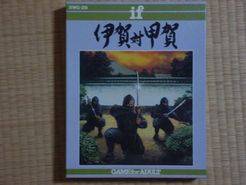 This is a tactical ninja wargame based on the struggles between Iga and Koga clans in Japan. Published by Bandai. This game is an area type game. However, "Storm Over Arnhem" is different systems. Setup Decide Ninja's ability Ninja's ability (eight abilities) is decided(Movement,Detection,Magic ability,Combat Rating,Quickness,Physical strength,recovery power,Ninjyutu). It gives a name at the end. Appearance unit Ninja and Samirai;Casket; The ninja turns inside out at the time of initial arrangement and arranges it. The back is disguised as the samurai. System Sequence of Play 1.First Player:First movement Phase 2.First Player:Combat Phase 3.First Player:Second movement Phase 4.Second Player:First movement Phase 5.Second Player:Combat Phase 6.Recovery Pahse:Both Player Basis of movement It is not possible to move diagonally though a length movement or a horizontal movement can be done because it is an area type movement. The movement can be moved the below the floor level and back of the ceiling.