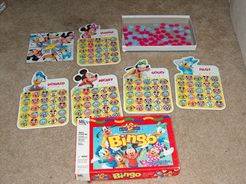 This is a children's bingo game with a Mickey Mouse Theme. Each player receives a bingo card with a 5x5 grid of Disney characters with different colored backdrops. A spinner is used to call spaces. The outer circle of the spinner shows the various characters while the inner circle shows colors (5 per character). For example: If the spinner arrow points to the color blue and Donald Duck's face, "Blue Donald Duck" is called out. Any player with a Blue Donald picture on their card would cover it with a chip. The first player to cover 5 characters in a row with chips wins.