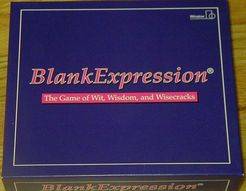 Ages 12 and up of PLAYERS: 2-4 players or teams OBJECT OF THE GAME: Players accumulate points by filling in the missing word or words in quotes or by identifying the famous people the quotes are by or about. EQUIPMENT: The game includes a card holder, 64 two-sided game cards, two card screens, seven scoring pegs, and a minute timer. TYPES of QUOTES: There are three types of quotes in the game-- 1) quotes in which one or more words have been replaced by "[BLANK]"; 2) quotes about a person to be identified, which have the nouns or pronouns referring to that person underlined; 3) quotes by a person who must be identified RULES OF PLAY: Each game card has three categories of quotes. (EX. History, Author, Movers and Shakers) A player (or team) slides down game screen to reveal one quote in one category. All players can hear and see the quote. The current player can make a guess as to the answer, scoring points if correct, and losing points if incorrect. The player can also pass. If the player passes or is incorrect, play passes on clockwise to the next player. OTHER NOTES: The gamebox says that this stand-alone game is "a sequel to 'Quote, Unquote', chosen 'Best New Trivia Game' by GAMES magazine, 1994."