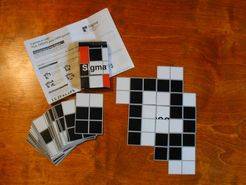 Sigma is a new deck of playing cards. There are 52 total cards in the deck with 15 distinct types of cards. Each card has a geometric shape on it consisting of 6 squares that are either black or white. Shojiro Doi, the designer, is an amateur 7-dan Japanese Go player. Three games have been create by the designer: Escape (2 players) - A "Cat and Mouse" game where one player takes "Black" and the other "White" and they take turns adding cards (tile-placing style) to the current board. The "Black" player's goal is to enclose the "White" player, while the "White" player's goal is to remain free. Six (2-4 players) - Each player starts with a quadrant of territory on a board and takes turns playing cards on to the board. Special rules reward players for making a quadrant into a single color or forming lines on the board. First player to play all of his/her cards wins. Nine (2-6 players) - Sigma style poker where players bluff and bet that they can best match a pattern selected for each hand.