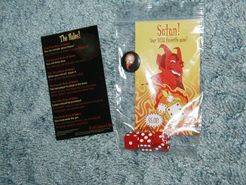 The game comes with a flaming dice pin, which the players wear. When two players meet (recognizing the pin), the game begins when one of them declares "Satan!" Then both players roll three six-sided dice on the nearest convenient surface. Any die that doesn't come up 6 is rerolled. The first player to have all three dice showing sixes (6-6-6) and declare "Satan!" is the winner. If other players hear the initial call, they can declare "Satan!" and join the game. The game was sold as a joke at GenCon 2003, but turned into a minor hit. Prospective buyers weren't told the rules unless they bought the game, but at $5, it drew in many curious gamers.