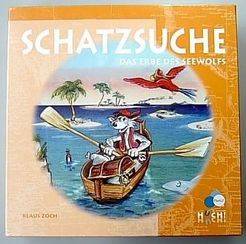 From Spielbox: Schatzsuche: Das Erbe des Seewolfs (Treasure Hunt: The Inheritance of the Sea Wolf) is an exciting treasure hunt for children invented by Klaus Zoch. A brave little wolf is on the search for booty. Gold coins and jewelry get added to Wolfi's as well as his young helpers' possessions when they manage to accumulate as many pairs of identical island- and treasure-cards as possible. But the Devil is in the details: Two of the beautifully-illustrated cards, although they may appear identical at first glance, are actually different upon closer inspection. Guessing wrong impacts Wolfi's treasure hunt: the goods have to be returned. The winner at the end of the adventure is the person who has managed to accumulate the most treasure. An extra dose of excitement is afforded by the little pirates that challenge each other to guessing contests.