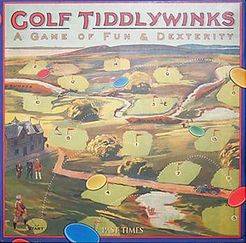 Simple Tiddlywinks variant in a small (15cm) square box with a fold-up hard board (4 x the size of the box) featuring 16 holes. The box says it's based on an original table-top board game from the 1920s. Landing in a lake or bunker sends you back to the start. Landing on another player's token sends them back 3 spaces. From back of packaging: Golf Tiddlywinks A Game of Fun &amp; Dexterity Golf Tiddlywinks is a challenging game of skill based on an original table-top board game from the 1920s. It was designed as a celebration of golf, the 'Royal and Ancient' game that was hugely popular with affluent 'bright young things' whose world is reflected in novels by Evelyn Waugh, Nancy Mitford and P.G. Wodehouse Play begins once each player has selected a colour counter and the order of play has been decided. Each player takes it in turn to place his counter on the starting point and flip it once towards Flag 1. When it is his turn again, the player flips his counter towards the first 'hole' from wherever it is on the board after his previous attempt. To complete the 'hole', a player's countermust come to rest on the white circle of a flag, but is not necessary for it to cover the whole of the space. When a player's counter touches the white circle and completes a 'hole' it can be flipped agian towards the next flag. The winner is the first player to reach Flag 16, the final 'hole' of the Golf Tiddlywinks course. A counter that comes to rest on an opponent's counter must go back three 'holes'. Counters that land in a bunker or lake are returned to the start, from where the player must try to reach the Flag that was his goal before he encountered the hazard. Counters that leave the board entirely are returned to the start, from where, after missing a turn, the player must try to reach the Flag that was previously his goal. For up to 4 players aged 3 years and over Not suitable for children under 36 months due to small parts. Original game courtest of Richad Ballam antique games archive