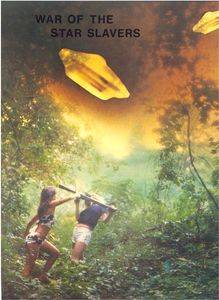 The third Meta-Galactic War ended with the realization by the belligerent empires that over 70% of their fleets had been destroyed. The decimation of their fleets also forced the contraction of their outer boundaries. Fearing that hostilities would be resumed before they could rebuild their fleets, the empires mutually agreed to bar all warships heavier than a cruiser from these liberated or abandoned (depending on your viewpoint) areas. Spontaneously the deserters, criminals, and other opportunists rose to fill this void. By preying on commercial ships and providing availability to now unobtainable or illegal items, they amassed great fortunes and others died in poverty or on the gallows. War of the Star Slavers is a simulation of these violent times. As an empire player you must protect your commerce and prevent unrest among your populace so that you can rebuild your fleets. You must also protect yourself against the other empire as it is in his interest to see your economy fall apart as much as it is to defeat you on the field of battle. The Slaver players must amass a fortune and retire before they are apprehended. The Slaver must pay for fuel, his crew, repairs on his ship, etc. In other words every turn costs him money, but he can obtain large amounts of money by dealing in contraband or illegal acts. The greater the chance he takes the greater his return will be. You can make any deals you like with whomever you choose. Anything you can get away with is valid. No act is too vile, no deal too dishonest.