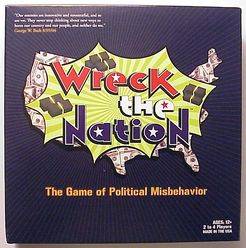 想玩 拥有
Wreck The Nation: The Game of Political Misbehavior

Wreck The Nation: The Game of Political Misbehavior injects political satire into a classic board game format. Players race to spend billions of dollars in play money while following real Bush policies. They become Politicians beholden to special interests, receiving one trillion dollars in taxpayer money. Players throw the dice and travel around the board, following instructions on Revenue, Expenditure and Homeland Security cards. Players Gouge the Government, acquire media monopolies, Declare War, Poll the Public, and engage in multifarious pursuits, until somebody spends his or her last taxpayer dollar to win the game and "Wreck The Nation". Players register on-line and enter a code printed at the bottom of each card to get the facts (or fun) behind a card.