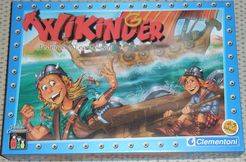 Together with his father Leo, 12-year old Federico Colovini has developed the children's game Wikinder (Vikids). As the captains of Viking boats, the players sail from island to island and load barrels - either from the island or from an opponent's boat that happens to be moored there. The goal is to be the first player to bring a certain number of barrels back to his home island. On a player's turn, he rolls three coloured dice. They decide how many islands further his boat may sail - but it's different than what many players are used to. If the player's own colour is rolled, then his movement is reduced by one. If he has barrels on board, then none of those colours may be rolled either. The more colourful the load, the greater the chance of not moving very far and losing the load instead. An innovative idea.