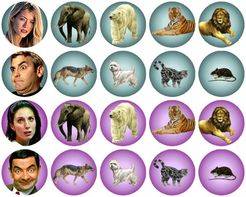 "Fauna" was originally inspired by the traditional Chinese "Animal Game". It is played on an 18 x 14 board. Both players have a set of 8 hierarchically ordered animal pieces (elephant, polar bear, tiger, lion, wolf, dog, cat, mouse) and 2 humans (woman and man). Bigger animals win against smaller animals, with two exceptions: The mouse beats the elephant, and the dog beats the polar bear. Humans are the weakest pieces; they lose against any animal. To win, you have to either cross the board with one of your humans, or eliminate one of the opponent's humans. Play is card-driven. For each piece (animal or human) there are 9 cards with values 1,2,2,3,3,3,4,4,5. There's also an identical set of joker cards, which can be used for any of the pieces. Players choose their cards from a hand of 7, one per turn, to move the corresponding piece. There's a page dedicated to "Fauna" http://www.terra.es/personal2/u.roth/fa-00.htm where, among other things, you can find the rules in English, German and Catalan, all graphics (board, pieces cards) for download and do-it-yourself instructions.