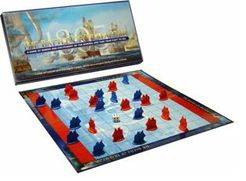 The Battle of Trafalgar 1805 board game celebrates the 200th anniversary of the famous encounter between the combined fleets of Napoleonic France and her ally, Spain, against the British fleet commanded by Admiral Horatio Nelson on the 21st of October 1805. The game contains miniature ships of the line to give the realistic appearance of two fleets of "Men 'O' War" engaging in battle.