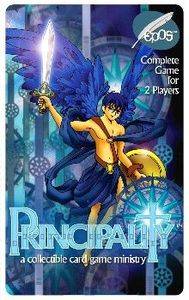 A CCG where Angelic hosts battle out demons. Players play as team of angels – gold team and blue team. The first player to capture 3 of the 5 Deceiver cards win. Each Deceiver cards has four sides and each side has a number, representing the Deceiver’s strength. Each archangel card has a single number, representing its own strength. Players must play sets of archangel cards next to each side of a Deceiver to equal or better the strength number printed on that side. When a player has played sufficient archangels to equal the strength number on the one side of a Deceiver, that side is covered. The first player to have all 4 sides, of a Deceiver covered has successfully "bound" the Deceiver and takes the card. Each Deceiver card also has a few dice pictured on the center of the card, two red ones and a white one. During the end of the turn, a die is rolled. If you roll one of the numbers one the red ones, you must pick up a Minion card and immediately follow the instructions on that card. If the white is rolled, you most discard you highest vauled card that is currently in play. There are also good "special cards" that can be played as well during the game.