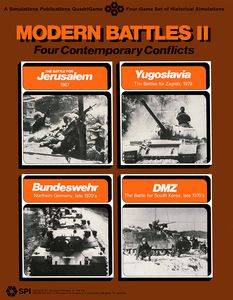 The "Modern Battles II" Quadrigame consists of four contemporary games. These games are completely new and individual and are sold separately and as a complete set. The games included in this Quadrigame are: Bundeswehr - Northern Germany, late 1970's (Hypothetical) Yugoslavia - The battles for Zagreb, 1979 (Hypothetical, but eerily prescient of a civil war between the Serbs and the Croats.) Battle for Jerusalem - a fierce and bloody battle fought between Israeli and Jordanian forces during the Six Day war of 1967. DMZ - The Battle for South Korea, late 1970s (Hypothetical) The game mechanics used in this series are similar to those found in other Quadrigames. The Standard Rules are identical to those used in the first Modern Battles (Quad). In this new series the same scale is used (one mile per hex and 12 hours a turn). Units range in size from companies to brigades. Artillery units have the ability to add to the defensive strength of friendly units being attacked. Artillery has various ranges, some in excess of ten hexes. Also included (in various games) are rules for Untried units, special river conditions, other special terrain, airpower, ammuniton depletion, B-52 and B-1 bomber attacks, commandos, paratroopers, stacking, garrison units, bridge destruction, militia, artillery suppression, command control, helicopters, replacements and international cooperation. Movement is sequential and single-phased. Zones of Control are rigid, and combat is mandatory between adjacent units. The Combat Results Tables (there are two, representing different doctrines) use a differential system. The "Active Combat Results Table" is very bloody, with a large possibility of exchange and elimination, even at low odds. The other table, the "Mobile Combat Results Table" is a bloodless CRT, offering mostly retreat results. Terrain varies from flat, open plains to some of the most rugged in the world. The terrain effects on combat are taken into account by a system whereby the combat differential is actually altered (column sifts) by the terrain the defending unit occupies.