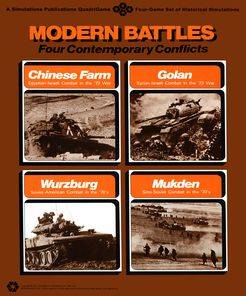 The "Modern Battles Quadrigame" consists of four completely separate games, each with its own 17" x 22", three-color map, unit counters and Exclusive Rules. The Standard Rules are common to all four games. Game scale is one mile per hex and 12 hours per game turn. Unit sizes range from battalion to Brigade. Design is a simple IGO-UGO sequence of play utilizing rigid Zones of Control and a differential based CRT. Artillery units can participate in combat from non-adjacent hexes in attack and defense. The games included in this quad are: Chinese Farm - covers the combat between the Israeli and Egyptian force around the Suez Canal, during the latter half of the Yom Kippur War, October 15 to 21, 1973. Wurzburg - (Hypothetical) A vital communications center, dominating the route of Soviet invasion into West Germany, which would be the site of a clash between Soviet Mechanized Rifle Divisions and the American Third Mechanized Infantry Division. Golan - On October 5, 1973, the Syrians launched an offensive with the objective of driving the Israelis off the Golan Heights. They came close to success, but were eventually hammered back to the outskirts of Damascus. Mukden - (Hypothetical) Mukden is a great industrial center which lies at the edge of the vast Manchurian plain. It would be a vital objective in a Soviet invasion, and would be hotly contested as the first threatened Chinese city. A follow up set of four new games was later published as Modern Battles II: Four Contemporary Conflicts.