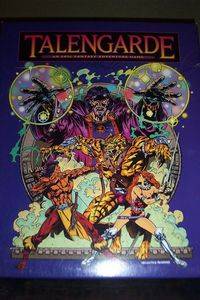 From the back of the box: Twoelk the hunter looked at Alyta and then at the portal at the far side of the vast hall. She, too, knew it was their one chance of getting home again. The fog that rolled out of the portal had left stones in the fortress slick with dew, so the two of them approached it with caution. According to what the avatar at the oracle had said, Urrick would be here, and he would be unbeatable without the aid of a spell caster. That is why, as a sinister form began to take shape within the eldritch mists of the portal, Twoelk’s trepidation grew. He slowly drew the magic arrow from his quiver, and glanced sideways at the amazon. Alyta’s eyes were fixed on the portal and the terror within. They could now discern the immense stature of the Rakshasa as it stepped through the vapors. It was Urrick. As the tiger-man’s pale eyes narrowed on the two adventurers, he sneered. He would enjoy eviscerating these foolish humans, and dining upon their entrails. But before he could pounce upon his victims, an unseen force left him suspended in mid-leap. It seemed the Twoelk and Alyta were equally stunned. “Now, my friends! Strike now!” It was the voice of Brannig, whom they believed had been killed in the ruins south of the oracle. Twoelk stammered, stymied. “You can’t keep a good mage down,” Brannig replied to their unvoiced question. “But magic will only keep Urrick immobile a few seconds more. Now be quick!” Welcome to Talengarde, A world of fantasy and adventure, heroes and quests, magic and chance. This game features a customizable playing area, numerous beings, and dozens of secret objectives and plot twists ensuring hours of fascination and thousands of game scenarios. And, unlike many role-playing games, Talengarde does not require a “game master.” It includes everything you need to start your adventures. Box contains: 6 – Map Boards 36 – Map Building Pieces 6 – Colored Dice 6 – Colored Pawns 396 – Game Cards Featuring Original Artwork 200 – Game Markers 1 – Instruction Booklet