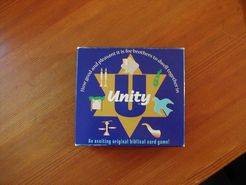 The object of the game is to win the game by playing all of your cards, where the final cards you play are two or more "righteous" cards or a single Unity card. There are three categories of cards in the game: righteous, evil, and festival. Unity is a Biblically based strategy card game where "righteous" cards are played in unity to enter into righteousness with other players and to defeat evil attacks. There are also festival cards that allow all of the players to celebrate each Biblical festival described in the book of Leviticus, chapter 23. The game is a rather complicated one, but once learned it is a pretty engaging game, despite the simplistic sound of the basic objectives. The righteous, evil, and festival cards each have various categories and point values, along with special instructions for playing them. The rules that come with the game are very basic, but there are some expanded explanations on the game maker's website at: http://www.unitygame.com/ Along with options to play online via a Java game.