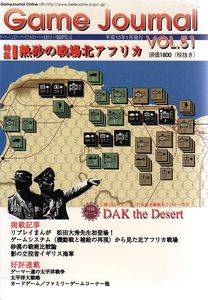 DAK the Desert is campaign level wargame for North Africa in World War 2. This game published in the self-published edition (old) Game Journal volume 51. Players control either Axis or Allied army in North Africa. Players manage unit organize, supply, movement and combat. Each combat unit represent battalion, regiment or brigade and they can operate individually, but they are organize into division for more efficient activation. Each turn is a repeat of the unlimited number operation impulse. However, the each impulse must spend a supply point, and each combat is require extra supply point per involve formations. Reinforcements and supplies must purchase by transport points. Winner determined by control of Benghazi, Tobruk and Alexandria. If either player controlled all three places at end of the turn, he can achieve sudden death victory. Alternatively, at the end of the game, the winner determined by the control situation.