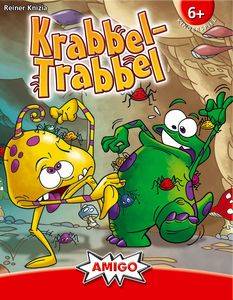 Your monstrous self has been infected by creepy-crawlies, and you want to rid yourself of them to make yourself calm again, but to make them leave, you need to put in some effort... In Krabbel-Trabbel, first released as Fleckenmonster, each player starts with up to ten crawler tokens on their monster card, while thirteen action chips are placed face down in a circle. On a turn, the active player reveals one of these action chips, then carries out the order depicted there. Perhaps you need to memorize, then reveal certain actions chips, but often you need to participate in "monster games". You might have a task like making faces, naming ingredients in a soup, or imitating animal sounds, and on your turn you must first imitate in order everything done by the other players, then complete the task in your own way. Complete the task or win the game, and you can remove one of the crawlers on your body. Eliminate all of your crawlers to win!