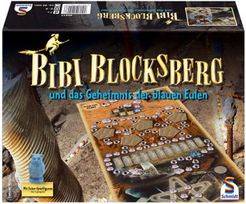 This game was released at the same time of the movie "Bibi Blocksberg und das Geheimnis der blauen Eulen!" (translated as Bibi Blocksberg and the Secret of the Blue Owls!) in Germany. The movie (with the title character Bibi, who is a young witch) is based on a decades-old, long-running radio play and animated series but was also inspired by the success of the Harry Potter movies. It's a roll and move game for juniors with four quests to complete. Roll and move effect is mitigated in a number of ways - players can re-roll once in each turn and they can collect helping cards when arriving on specific spaces or rolling a pentagram. The four quests are as follows: - Library: find the book that opens a secret door to the secret passage. For this, find the same-colored book as the spaces you arrive on. - Maze: to find your way through the maze, move the 5 moving pentagon tiles showing parts of the maze. These can be moved (turned or moved to different spaces) when rolling a pentagram or when arriving on a pentagon space. Cards might also help. - Suspended bridge: each step (space) has some hidden traps that are revealed when stepping on them, easily causing players fall into the abyss. Some of them can be avoided with knowledge (knowing which blue owl has which number on its bottom), others with planning and luck (e.g. tiles where you fall into the abyss if you arrived there with specified die rolls), others with discarding a card. If a player falls into the abyss they have to climb back to the bridge and try again. The task gets easier once tiles are revealed and players know what to expect. - The Five Owls: owls have to be placed on the five numbered spaces in order (the owl with number 1 to space 1 and so on). If a player fails they go back to the entrance of the owls hall. The numbers on the bottom of the owls can be looked at during game (with cards or when rolling a pentagram) but whenever they are checked (secretly, by the active player) they are placed back to another space so their location keeps changing and players must watch their movement closely during the course of the game. The first player to correctly place the fifth owl to its corresponding place on the last space of the path wins.