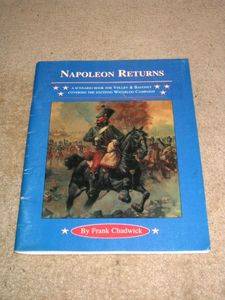 (from the manual :) Napoleon Returns is a Volley &amp; Bayonet scenario book covering history's most famous campaign. It provides: - historical background on the four battles of Quatre Bras, Ligny, Waterloo &amp; Wavre. - complete scenarios for all four battles. - a Campaign System which allows you to re-fight history's most famous campaign. - a rules update to refine Volley &amp; Bayonet for Napoleonic Warfare. - an extensive look at all the armies and their uniforms. - a complete order of battle, and labels for unit bases to allow quick set-up. - a point system to allow you to design you own scenarios. - 9 maps, one each for the terrain and deployment for each battle, and a 2 page campaign map. Volley &amp; Bayonet is the most practical way to fight the great campaigns of 1815. Find out if Napoleon has to meet another Waterloo.