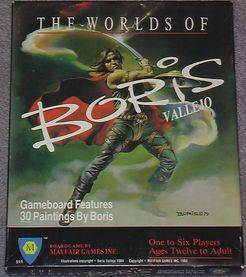 From the 30 world tiles (each featuring a different painting by Vallejo) each player, 1 at a time, chooses one and places it so that it touches at least 1 other tile. This is done until each player has placed 5 tiles. This makes up the playing board. Each player then receives 8 cards from the card deck. Cards come in 4 flavors. World cards, which are not shuffled into the deck, have info about each world tile. The player who owns that tile takes the card for reference. Character cards have a base strength, class and a home world indicator. They can be played to a tile that you own as defense against attack. If they are played to their home world their strength is doubled. Scroll cards can be placed on worlds and used by characters that can wield magic. These cards boost the base strength. Artifact cards can be used by any character. They boost strength and sometimes have special powers. Each player picks a world tile to be his home and places 5 of their 8 cards there to defend it. Players also have a pawn that represents their army. During a turn a player first draws 3 cards from the deck. Second a player may play up to 2 cards. These cards can be played from his hand to a controlled world, from a controlled world to another controlled world or from a controlled world to his hand. Third a player may move his pawn 1 or 2 worlds. If he enters a world controlled by another player he must stop. Although not stated in the rules I would assume if a pawn is in a world not claimed by another player he could claim the world and play cards there. If a pawn is in a world occupied by another player you would then have a battle. A battle is fought between the cards on the tile as defense and the cards from the attacking players hand. Calls from allies can be made and other players can contribute to the battles as well. The first player to control 8 worlds wins.