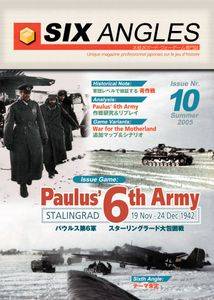 Paulus' 6th Army is an operational level simulation of the Soviet encirclement operation named "Operation Uranus" and the German escape attempt from Stalingrad from 19th November to 24th December, 1942. This game represents the first significant operational victory of the previously inferior Soviet Red Army over the Wehrmacht. For this reason, the battle of Stalingrad in often referred to as the "turning point" of the World War II. But in this game, the German player has more options of command than Friedrich Paulus, the commander of German 6th Army. So the German player may conduct withdraw from Stalingrad with his troops as he chooses and may defend more effectively than the historical static situation. (source: Six Angles webpage)