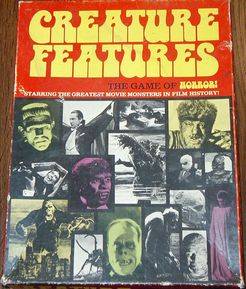 Creature Features is a Monopoly-style game in which the players attempt to make a fortune through producing classic monster movies, using actual films and stars from the twenties through the early seventies. The relationship to Monopoly is so blatant that at the start of the rules (and in the rules' largest font) is this quote: "This game plays similarly to the famous Monopoly game." The board features a rectangular track with spaces for each movie featured in the game (akin to Monopoly properties). There are also Tombstone Award and Dead or Alive spaces (causing card draws, as with Chance and Community Chest in Monopoly). Finally, there are Ghoul Agency spaces that allow you to draw and purchase actor cards. As you travel around the board, you buy movies and acquire stars. There are two actors associated with each movie and upon landing on a Ghoul Agency space you draw three actors for possible purchase. You can attempt to buy any actors who are in a movie that you already own or, if none match, you may still choose to purchase one of the three cards drawn. The price of an actor card is determined by a roll of the dice, multiplied by a base dollar amount. Completing a production (acquiring the movie card and both associated actor cards) requires other plays to pay you a fee if they land on the movie's space on the board (making the actors somewhat like adding houses to a property in Monopoly). Also, having a completed production allows you to draw a card when you land on an award space. If you win a major award, you place it on the movie and anyone landing there has to pay you a premium (similar to having a hotel on a property in Monopoly).