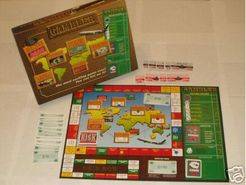 From the game's website: Gambler was invented by Charlie Towlson and friends in 1987 and has attracted a huge cult following amongst those who play it. This has lead to annual tournaments, most notably the UK Championships which grows in attendance every year. The object of the game is to gamble your way around the world on a set course of Reno -&gt; London -&gt; Monte Carlo -&gt; Tokyo -&gt; Sun City -&gt; Las Vegas. The game is won when a player completes the course and finally wins a bet in Las Vegas. This means that the climax to every game is always a winning bet; failure to win that bet means the game continues. Gambler made its serious debut at the London International Toy Fair in 1998 and was voted in the Top Ten New Games.