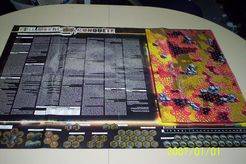 Published in Backstab magazine n°43 (March/May 2003 - FC Publications [Asmodée / Halloween Concept]) as an homage to the original and very rare game Full Metal Planète. 10 years after the mineral gold rush from the Full Metal Planète game, the spacecrafts are returning to the mother planet only to reach it after a nuclear war that devastated the Earth. Instead of joining forces, the 2 groups continue their rivalry in trying to save the remaining survivor who are hidden in bunkers. Full Metal Conquête allows 2 players to try to save survivors on a devastated Earth. There is no change in the rules. Water was replaced by radioactivity, but everything works the same with different names. Map is 13 x 30 hexes. All the game (i.e. rules, counters, map) is on the central poster of the magazine. Counter must be glued on cardboard and cut. The game is produced in French.