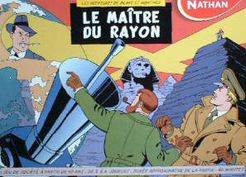 Based on the Belgian comic Blake et Mortimer. In this game you try to prevent the evil Olrik from obtaining a deadly device which can destroy the world. A player gains points by saving cities. Each turn a player plays a card. First he/she follows the instructions of the card played. Then the player moves his/her pawn as many spaces as indicated on the card. When a player finds a deadly device, he or she looks secretly at the name of the city written on the device. If the city isn't threatened by Olrik, the player puts back the device. Otherwise the player places the deadly device in front of him/her. The the player takes an Olrik Execution Card and threaten a city and rotates the spinner. If the number is lower than the number of the city, it stays there and players can save the city. If not, the city is destroyed. If all cities are destroyed and/or saved the game ends. The player with the most points wins the game.