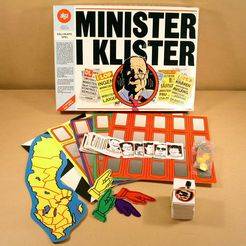 You are the Prime Minister (oddly there is four parties (purple, yellow, red and green) all with their respective Prime Minister!) and try to control your ministers so you can stay in power. But some of the ministers leak stories to the press, but who is doing it? Ministers that become too involved in sleazy affairs will be sacked and given new roles as county governors (of which there was 25 in Sweden at this time, correctly reflected in the map of the game). The player (Prime Mister / party) with the fewest county governors when all 25 has been appointed, wins the game.