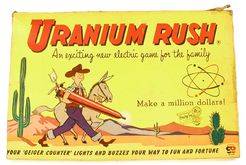 Uranium Rush was an "educator approved" game from the 1950s. Players begin with $15,000 and prospect for uranium in an area determined by a spinner (mountain, hills, or desert). Claims can be purchased for $1000 each and may be auctioned off or tested for uranium. This involves an electric "Geiger counter" that produces a buzzing sound if uranium is discovered. The claim is then sold to the federal government for $50,000. Players alternate turns until all claims have been staked and the person with the most money is declared the winner.