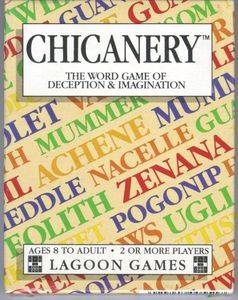 Another variant in the Dictionary family of games, of which Balderdash is the widest-known member. Chicanery consists of a deck of 51 cards, each with 5 obscure words and their definitions. The players form two teams, and each team starts with one card; one word at a time is used, starting with the top word on the card. Each player on a team makes up a definition for the chosen word, and the fake definitions, along with the real one, are given to the other team, whose players try to guess which is the real one.