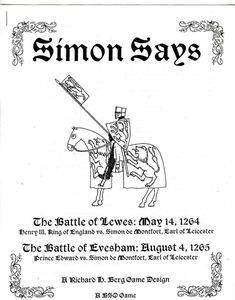 Simulates the two major battles of the 13th century revolt of Simon de Montfort against the rule of Henry III. Outnumbered two to one, and with his left wing of Londoners routed by an opening royalist cavalry charge, Simon still managed to smash Henry's tired army and capture the king and Prince Edward at the Battle of Lewes on 14 May 1264. However a year later, dissension among the revolting barons and Prince Edward's great escape led to the death of Simon and the revolt at the Battle of Eveshame on 4 August 1265. Two 22x17 inch maps, 200 counters that have to be mounted and cut.