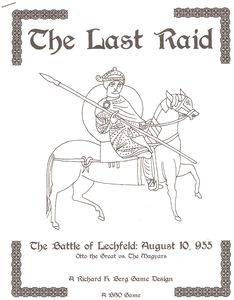 Simulates the 955 Battle of Lechfeld (near Augsburg, Germany) which pitted Western-style heavy cavalry against Eastern-style hit and run mounted archers. For two centuries, the deadly mounted Magyar archers had been raiding west, out of the Hungarian plains, devastating German duchies and reaching into the south of France. Hearing another raid was on the way, King Otto gathered an army of heavy, armored cavalry and marched to meet them. Uses the Simon Says game system which is similar to Kingdom for a Horse. 11x33 inch map, 200 counters that have to be mounted and cut.